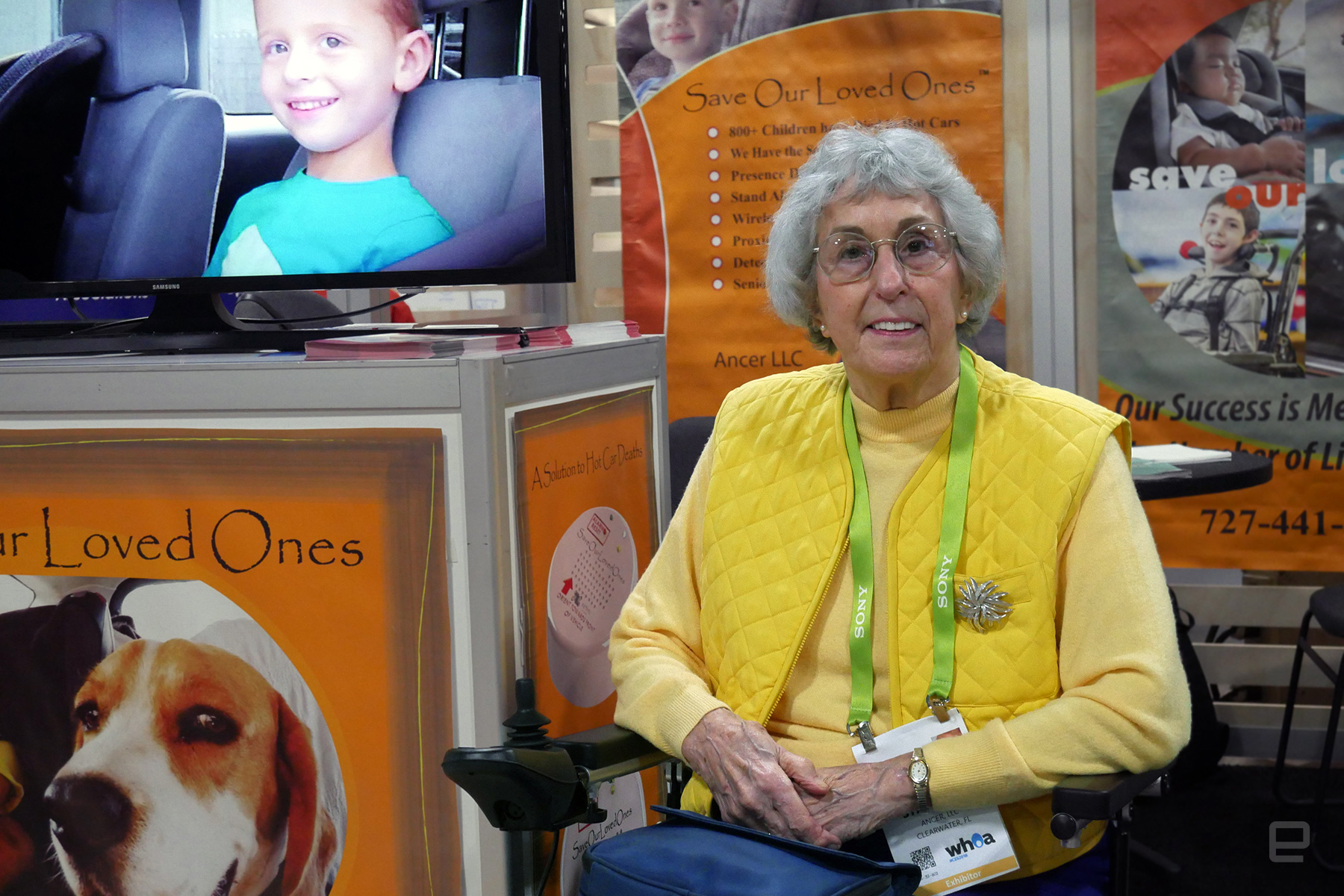 On the first official morning of CES, Carol Staninger stopped and started her motorized wheelchair through the cavernous Sands Expo and Convention Center, trying — sometimes failing — not to clip the herd of eager attendees who overlooked the octogenarian at chest height.

A service elevator took Staninger, with gray hair, a pale-yellow jumper and silver brooch, to the show floor. She politely received a flyer from an over-perfumed woman representing a French shoe company. She consulted her flip phone to find the rest of the team. And eventually, Staninger arrived at her booth in the trade show’s startup section, opposite an electric-skateboard showcase and a Korean company selling iPhone cases with embedded stun guns.

“I have arrived,” she said to her team.

More than 170,000 people from 150 countries are at this year’s CES, but it’s rare to see an 82-year-old startup entrepreneur. For Staninger, president of Ancer LLC — a blend of her name and her two children’s, Andrea and Eric — it’s her first CES. The last time she even passed through Las Vegas was the other side of the year 2000.

Raised in Winter Haven, Florida, she started working for a local hospital at age 19 and remained there for 42 years, mostly as a secretary. Her first brush with technology was in the 1960s, when she was introduced to an IBM electric typewriter. “I embraced technology, word processors and computers,” she said. “It just made things better.”

In the summer of 2016, well into her retirement, she read news reports of infants who died after being accidentally left in hot cars. Often left in safety seats that face backward in a momentary lapse of caregiver concentration, there were 42 such deaths last year in the US and 742 since 1998; the majority are children 12 months or younger.

“You see a little child, and you know this child will never grow up,” she said. “He’ll never walk on the beach, never have children, never grow up. His life is over before it began.”

Staninger began conceptualizing a monitor for children left in a back seat, shopping it first to the Florida Polytechnic Institute then to Charles Ferrer, president and CEO of Florida manufacturer CMS WorldGroup.

Called Save Our Loved Ones, its prototype is a motion monitor slightly smaller than a home fire alarm attached to the inside of a car’s roof. It links to a keychain fob. When the fob is 15 feet or more from the car, the sensor looks for movement and sets off an alarm if it detects even a slight chest expansion of 1 mm. Under a collaboration between Ancer and CMS Worldgroup, Staninger and Ferrer aim to release the product by fall 2018. They expect it to retail at $300, with the hope that it becomes integrated into car manufacturing in the future.

In the meantime, she’s thinking of new safety-oriented businesses too: for instance, a sensor for heavy mowers to sense depressions in thick vegetation and stop crashes. “One idea leads to another,” she said.

In her five days at CES, she and Ferrer are aiming to license or sell the Save Our Loved Ones — particularly given Staninger’s age and her investment of $170,000 in the project so far. “We’re focusing primarily on the larger communications companies, larger device manufacturers, to gauge their interest,” said Ferrer.

As you comb through Eureka Park at CES® 2018, you can discover the next set of game-changing technologies before they make it big—or meet the next wave of tech leaders before they become market movers. But look closely among the more than 900 startups from around the world, and you’ll find an inventor unlike any other – one who’s already had a quite a career.

Carol Staninger is the president of ANCER, LLC, a company based in Florida. She’s a passionate advocate for the welfare of children, after spending decades in the medical administrative field. She’s a fan of Popular Mechanics, Popular Science and Scientific American. And she’s not only exhibiting, but attending her first-ever CES.

“When I first became interested in science and technology, I thought CES was a fascinating place to go—but I never actually went,” says Staninger. “You read so much about it every January. I just never followed through and attended a show.”

So, why come to CES now? After seeing news story after news story about children and dogs accidentally left in hot cars, Carol decided she could make a difference—through technology.

She knew NASA could track astronauts’ wellness without being too intrusive, so Carol worked on a way to track the breathing of people and pets and sound an alarm if something were wrong. But Carol herself says her STEM training adds up to “absolutely none,” so she needed help moving from idea to invention.

While watching the local news, Carol saw a story featuring Charles Ferrer, president and CEO of Florida-based CMS Worldgroup. The two arranged a meeting, struck a deal, decided on a sensor-based device and found a manufacturing partner.

“We went from there, figuring out this step and that step,” says Staninger. “Finally, we got a prototype and we tested it out. So then, Charles decided we better go to CES, because it’s the place to go for consumer technology innovations!”

The result – a car alarm called Save Our Loved Ones (SOLO) to prevent children, seniors and the disabled from being left too long in hot cars. As for getting to market, the pair connected with longtime consumer technology veteran Ron Freeman, CEO of Instrument Sales & Service (ISS).

“First I thought, what a great product—and then, what an incredible story!” says Freeman. “After her own successful career in the medical field, Carol has committed her time to solving this problem and saving lives. I think her innovation will be a big hit in Eureka Park!”

And Carol’s goal for CES 2018 (other than seeing as much innovative tech as possible)?

“I would like to have somebody buy the company,” says Staninger. “Our innovation can go into every vehicle worldwide—it’s not dependent on one single brand or auto manufacturer. I’d love to see SOLO in every single car!”
# # #